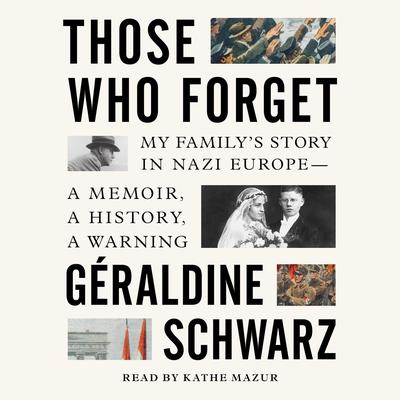 Those Who Forget: My Family’s Story in Nazi Europe—A Memoir, A History, A Warning

Winner of the European Book Prize

Winner of the NordSud International Prize

Winner of the Winifried Peace Prize

Those Who Forget, published to international awards and acclaim, is journalist Géraldine Schwarz’s riveting account of her German and French grandparents’ lives during World War II, an in-depth history of Europe’s post-war reckoning with fascism, and an urgent appeal to remember as a defense against today’s rise of far-right nationalism.

During World War II, Géraldine Schwarz’s German grandparents were neither heroes nor villains; they were merely Mitlaüfer—those who followed the current. Once the war ended, they wanted to bury the past under the wreckage of the Third Reich.

Decades later, while delving through filing cabinets in the basement of their apartment building in Mannheim, Schwarz discovers that in 1938, her paternal grandfather Karl took advantage of Nazi policies to buy a business from a Jewish family for a low price. She finds letters from the only survivor of this family (all the others perished in Auschwitz), demanding reparations. But Karl Schwarz refused to acknowledge his responsibility. Géraldine starts to question the past: How guilty were her grandparents? What makes us complicit? On her mother’s side, she investigates the role of her French grandfather, a policeman in Vichy.

Weaving together the threads of three generations of her family story with Europe’s process of post-war reckoning, Schwarz explores how millions were seduced by ideology, overcome by a fog of denial after the war, and, in Germany at least, eventually managed to transform collective guilt into democratic responsibility. She asks: How can nations learn from history? And she observes that countries that avoid confronting the past are especially vulnerable to extremism. Searing and unforgettable, Those Who Forget is a riveting memoir, an illuminating history, and an urgent call for remembering.

“It took only two generations for her family’s unexceptional wartime past to recede from view. But as the author painstakingly peeled away decades of denial, it was precisely the family’s ordinariness that would prove so chilling. Geraldine Schwarz’s book is a brave and important contribution to our understanding of memory.” —Daniel Okrent, New York Times bestselling author
“Absolutely remarkable…reading. [Those Who Forget] is a must.” —France Culture
“An absolutely fascinating book!” —France Télévision
“Very enriching…Outstandingly composed.” —Süddeutsche Zeitung (Munich)
“The book of the hour.” —Die Welt (Berlin)
“Crystal clear…A haunting work of remembrance.” —Westdeutscher Rundfunk (Cologne, Germany)

Geraldine Schwarz is a German-French journalist, author, and documentary filmmaker based in Berlin. Her first book, Those Who Forget, won the European Book Prize, Germany’s Winfried Peace Prize, and Italy’s NordSud International Prize for Literature and Science It has been translated into eight languages.