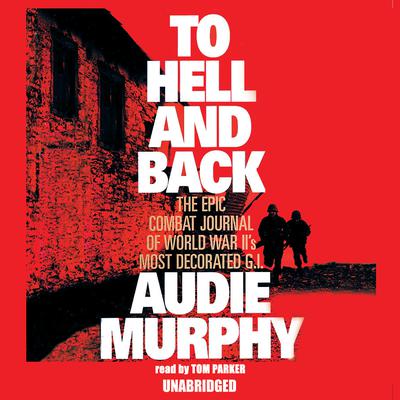 To Hell and Back

The time is 1943, the place is Sicily, and the event is the start of the most remarkable career of any American infantryman in the war. Audie Murphy was a desperately poor eighteen-year-old orphan when he joined the Army, nineteen when he first saw a buddy die from an enemy bullet and an enemy die from one of his own. By V-E day, he had killed at least 240 Germans, had single-handedly destroyed a German tank in one battle and held off six tanks in another, and had become the most decorated soldier in American history, winning every medal his country offered, including the Congressional Medal of Honor.

Instantly recognized for its grim authenticity and its unblinking accounts of some of the most terrible fighting in the war, To Hell and Back became a bestseller and, in 1955, the basis for one of the most successful World War II films ever made, with Murphy playing himself.

“In all the research I’ve done on World War II combat veterans I cannot recall another story that involves so much up close and personal fighting.”  —Tom Brokaw
“A book of raw honesty, clipped descriptions, and simple courage…[Grover Gardner] is quietly descriptive, and the listener can’t help being moved.” —AudioFile
“[Grover Gardner] brings this terse yet vivid and articulate memoir to life…[Gardner’s] clear and well-paced reading is a joy.” —Library Journal (audio review)

Audie Murphy grew up on a sharecropper's farm in Hunt County, Texas, in a family of eleven children who were deserted by their father. He was sixteen when his mother died and his brothers and sisters were sent to an orphanage or to relatives. When World War II broke out, he joined the infantry. By the war's end, Murphy had become the nation's most decorated soldier with twenty-eight medals, including three from France and one from Belgium. After he returned to a hero's welcome in the United States, he was persuaded by actor James Cagney to embark on an acting career, and he made more than forty films. In 1971, at the age of 46, he died in the crash of a private plane near Roanoke, Virginia. He is buried in Arlington National Cemetery.