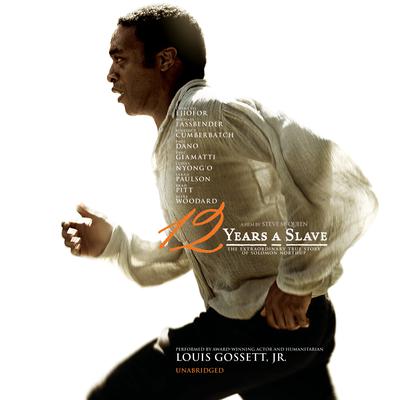 In this riveting landmark autobiography that reads like a novel, Academy Award and Emmy winner Louis Gossett, Jr., masterfully transports us to 1840s New York, Louisiana, and Washington, DC, to experience the kidnapping and twelve-year bondage of Solomon Northup, a free man of color. Twelve Years a Slave, published in 1853, was an immediate bombshell in the national debate over slavery leading up to the Civil War. It validated Harriett Beecher Stowe’s fictional account of Southern slavery in Uncle Tom’s Cabin, which had become the best-selling American book in history a few years earlier, and significantly changed public opinion in favor of abolition. A major motion picture based on the book and starring Chiwetel Ejiofor, Brad Pitt, Paul Giamatti, and Michael Fassbender released in 2013.

Hard working Solomon Northup, an educated free man of color in 1841, enjoys family life with his wife and three children in Saratoga, New York. He delights his community with his fiddle playing and antic spirit and has positive expectations of everyone he meets. When he is deceived by “circus promoters” who ask him to accompany them to a musical gig in Washington, DC, his joyful life takes an unimaginable turn. He awakes in shackles to find he has been drugged, kidnapped, and bound for the slave block in the nation’s capital.

After Solomon is shipped a thousand miles to New Orleans, he is assigned his slave name and quickly learns that the mere utterance of his true origin or rights as a freeman are certain to bring severe punishment, maybe even death. While he endures the brutal life of a slave in Louisiana’s isolated Bayou Boeuf plantation country, he must learn how to play the system and plot his escape home.

For twelve years, his fine mind captures the reality of slavery in stunning detail, and listeners learn about the characters that populated plantation society and the intrigues of the bayou—from the collapse of a slave rebellion resulting in mass hangings due to traitorous slave Lew Cheney to the tragic abuse of his friend Patsey, brought about by Mrs. Epps’ jealousy of her husband’s sexual exploitation of the pretty young slave.

When Solomon finally finds a sympathizing friend who risks his life to secret a letter to the North, a courageous rescue attempt ensues that could either compound Solomon’s suffering or get him back to the arms of his family.

“[Screenwriter John] Ridley said he decided simply to stick with the facts in adapting Northup’s book for the film…[and] he was helped by voluminous footnotes and documentation that were included with Dr. Eakin’s edition of the book.”—New York Times (September 22, 2013) on the making of the film 12 Years a Slave

“When I came across Solomon Northup’s autobiography Twelve Years a Slave I was astonished at every page; it was exactly the story I wanted to tell on film. The universality of the book, what ties it together, is family—it is the story of a man trying to return to his home. It is a story for our time, every bit as essential as Anne Frank’s diary.” —Steve McQueen, director of 12 Years a Slave, from the Foreword
“Delivered in the gruff, weather-beaten, but unbowed voice of Academy Award winner Gossett, Jr.…Throughout his reading, Gossett strikes a delicate balance between moral outrage, humility, and sheer world-weariness…Recommended not only for its connection to McQueen’s film but also for Gossett’s stellar reading.” —Booklist (starred audio review)
“The author is articulate and proud, and Louis Gossett, Jr., carries this tone throughout his reading. Northup writes in a straightforward style, letting facts and details speak more eloquently than emotion. Again, Gossett captures this feeling. But when the author does get emotional, Gossett infuses the words with a quiet, seething power.” —AudioFile
“A moving, vital testament to one of slavery’s ‘many thousands gone’ who retained his humanity in the bowels of degradation. It is also a chilling insight into the ‘peculiar institution.’” —Saturday Review
“I can never read his account of his days in slavery, of his independence of spirit, of his determination to be free…without believing that it would make a difference in today’s world if our contemporaries knew of such a man as Solomon Northup.” —Dr. John Hope Franklin, past president of the American Historical Association, bestselling author, recipient of the Presidential Medal of Freedom
“Such a tale is more powerful than any fiction which can be conceived and elaborated.” —Cincinnati Journal (1853)
“The extraordinary narrative of Solomon Northup is the most remarkable book that was ever issued from the American press.” —Detroit Tribune (1853)

Solomon Northup (1808–ca. 1870) was an African American who was born a free man in Saratoga Springs, New York. In 1841 he was kidnapped after being lured to Washington, DC, and sold into slavery in Louisiana. Following his courageous rescue came his riveting memoir, Twelve Years a Slave, which helped cement public opinion in favor of abolition leading up to the Civil War.