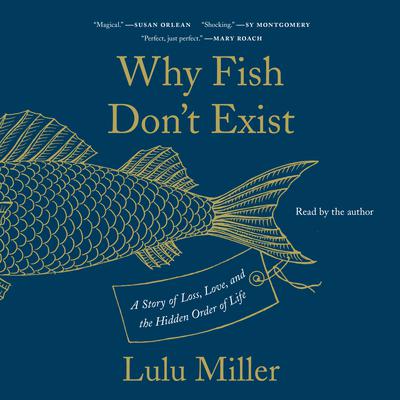 Why Fish Don't Exist: A Story of Loss, Love, and the Hidden Order of Life

One of Audible’s “10 Best Audio Books of the Year”

Why Fish Don’t Exist tells the story of a nineteenth-century scientist possessed with bringing order to the natural world—a dark and astonishing tale that becomes an investigation into some of the biggest questions of our lives.

When Lulu Miller was starting out as a science reporter, she encountered a story that would stick with her for a decade. It was the strange tale of a scientist named David Starr Jordan, who set out to discover as many of the world’s fish as he could. Decade by decade, he built one of the most important specimen collections ever seen. Until the 1906 San Francisco earthquake hit—sending over a thousand of his fish, housed in fragile glass jars, plummeting to the floor. In an instant, his life’s work was shattered.

Miller knew what she would do if she were in Jordan’s shoes. She would give up, give in to despair. But Jordan? He surveyed the wreckage at his feet, found the first fish he recognized, and painstakingly began to rebuild his collection. And this time, he introduced one clever innovation that, he believed, would protect it against the chaos of the world.

In Why Fish Don’t Exist, Miller digs into the passing anecdote she once heard about David Starr Jordan to tell his whole story. What was it that kept him going that day in 1906? What became of him? And who does he prove to be, in the end: a role model for how to thrive in a chaotic world—or a cautionary tale?

Filled with suspense, surprise, and even a questionable death, this enchanting book interweaves science, biography, and a dash of memoir to investigate the age-old question of how to go on when everything seems lost.

Lulu Miller is the cofounder of the NPR program Invisibilia, a series from NPR about the unseen forces that control human behavior. Before creating Invisibilia, she produced Radiolab for five years and was a reporter on the NPR Science Desk. She has an MFA from the University of Virginia on a Poe-Faulkner Fellowship. Her work has won honors from the Peabody Awards, the National Academy of Sciences, and the Associated Press.