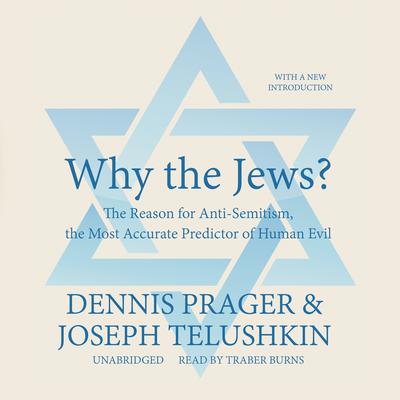 Why the Jews?: The Reason for Anti-Semitism, the Most Accurate Predictor of Human Evil

By Dennis Prager  and Joseph Telushkin
Read by Traber Burns

In this seminal work that has spent more than thirty years in print, Dennis Prager and Joseph Telushkin explain the reasons behind anti-Semitism, the world’s preoccupation with the Jews and Israel, and why now more than ever the world needs to confront anti-Jewish sentiment.

Why have Jews been the object of the most enduring and universal hatred in history? Why is the Jewish state the most hated country in the world today? Drawing on extensive historical research, Dennis Prager and Joseph Telushkin reveal how Judaism’s distinctive conceptions of God, law, and peoplehood have rendered the Jews and the Jewish state outsiders and labeled them as threatening. But as Prager and Telushkin are quick to point out, anti-Semitism is not just another ethnic or racial prejudice and is not caused, as so many people falsely believe, by Jewish economic success or the need for scapegoats. Rather, anti-Semitism today, as in the past, is a reaction to Judaism and its distinctive values.

Prager and Telushkin examine in detail how anti-Semitism is a unique hatred—no other prejudice has been as universal, deep, or permanent—and how the concept of the “chosen people” spawned that hatred. They also explore the role of non-Jewish Jews, such as Karl Marx and Noam Chomsky, in provoking anti-Jewish animosity.

In Why the Jews?, Prager and Telushkin identify the seven major forms of anti-Semitism—pagan, Christian, Muslim, enlightenment, leftist, Nazi, and anti-Zionist—and explain why it is impossible in today’s world to be an anti-Zionist without being an antisemite.

With an eye on the larger picture, Prager and Telushkin express why anti-Semitism threatens more than just Jews and what kind of changes are necessary to achieve a world without hatred.

“The wisest, most original, and provocative book on the subject I have ever read.” —Rabbi Harold Kushner, New York Times bestselling author
“A learned and wise book. It should of course be read by Jews who know what the tragedy of anti-Semitism has meant to them in our time. But it should also be read by non-Jews lest ignorance and indifference again be accomplices to crime.” —Martin Peretz, former editor of the New Republic
“The theory that Jewish values are the root of anti-Semitism regardless of time and locale is presented with utter clarity and cogent argument. This book deserves the widest attention. It offers a solution to anti-Semitism that is both inescapable and memorable.” —Rabbi Gunther Plaut, author of The Torah: A Modern Commentary
“Without a doubt, this is one of the most thought provoking books on this theme, clear, persuasive, and thoughtful. In seeking to study the origin and course of Jew-hatred, the authors have traversed history and psychology, religion, and current affairs. In a short span, they have ranged over two thousand years, every geographic region, and every manifestation of a phenomenon which is both all-pervasive and apparently indestructible. This is a provocative book. It is also a disturbing one. But this can be no doubt that it should be read by every person disturbed by prejudice and, indeed, by every prejudiced person.” —Martin Gilbert, British historian and author of Churchill: A Life and The Holocaust, A History

Dennis Prager is one of America’s most respected thinkers and radio talk-show hosts and the author of seven books. Called by the New York Jewish Week “one of the three most interesting minds in Jewish life today,” he is as respected by non-Jews, especially Christians, as by Jews. In addition to his nationally syndicated daily three-hour talk show, Prager has lectured around the world and in forty-five of the fifty states. He was a Fellow at Columbia University’s School of International Affairs, where he did graduate work at the Middle East and Russian Institutes. He has made three short films on values and produced the documentary Israel in a Time of Terror. He also conducts orchestras in California and has introduced many thousands of people to classical music.

Joseph Telushkin is the author of numerous books, including A Code of Jewish Ethics, Biblical Literacy, and Jewish Literacy: The Most Important Things to Know about the Jewish Religion, Its People, and Its History. His 2014 book Rebbe was a New York Times bestseller. He was named by Talk magazine as one of the fifty best speakers in the United States. His book, Words That Hurt, Words That Heal, became the motivating force behind Senators Joseph Lieberman and Connie Mack’s Senate resolution to establish a National Speak No Evil Day.