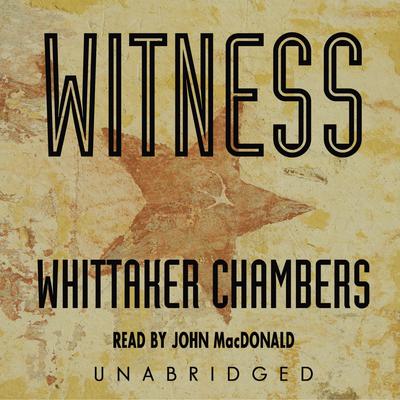 Whittaker Chambers' harrowing account of his journey to hell and back—through espionage, treason, and terror—is, ultimately, a story of faith.

First published in 1952, Witness came on the heels of America's trial of the century, in which Whittaker Chambers accused Alger Hiss, a full-standing member of the political establishment, of spying for the Soviet Union. In this penetrating philosophical memoir, Chambers recounts the famous case as well as his own experiences as a Communist agent in the United States, his later renunciation of Communism, and his conversion to Christianity. Chambers' worldview—"man without mysticism is a monster"—helped to make political conservatism a national force. Witness packs the emotional wallop and the literary power of a classic Russian novel and has gained Chambers recognition by critics on both sides of the spectrum as a truly gifted writer.

“As long as humanity speaks of virtue and dreams of freedom, the life and writings of Whittaker Chambers will ennoble and inspire.” —Ronald Reagan
“Whittaker Chambers has written one of the really significant American autobiographies…penetrating and terrible insights into America in the early twentieth century.” —Arthur Schlesinger, Jr.
“Confession, history, potboiler—by a man who writes like the literary giant we would know him as, had not Communism got him first.” —Christopher Caldwell, National Review, 100 Best Non-Fiction Books of the Century
“Chambers had a gift for language…To call Chambers an activist or Witness a political event is to say Dostoevsky was a criminologist or Crime and Punishment a morality tract.” —Washington Post
“Written with extraordinary intensity and power.” —Yale Review
“One of the few indispensable autobiographies ever written by an American—and one of the best written too…It deserves to be recognized as a first class achievement.” —New Criterion
“This many-dimensioned apologia, which is also a spy drama, a Quaker testament, and a spiritual autobiography, telescopes the major political and religious conflicts of the century.” —Booklist

Whittaker Chambers (1901–1961) was an American writer, editor, Communist Party member and spy for the Soviet Union who defected and became an outspoken opponent of Communism. He is best known for his testimony about the perjury and espionage of Alger Hiss.